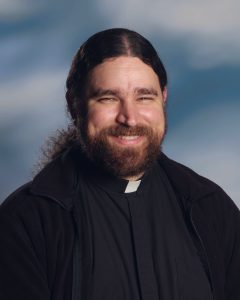 Hi there! My name is Father Jacob Maurer. I am a priest of the Archdiocese of Seattle, currently assigned to Saint Mark parish in Shoreline, Washington. This is my personal blog, where I post reflections, reviews, or random thoughts – usually on an irregular basis! Views expressed here are my own.

Although I’ve lived here the majority of my life, I’m not originally from Washington. I was born in Minnesota, but only lived there briefly before my father’s military career took us around the United States and to a few stations out of the country before finally landing in the Pacific Northwest. A few years later, I entered seminary. I attended Saint John’s Seminary College for my undergraduate studies and the University of Saint Mary of the Lake/Mundelein Seminary for graduate studies.

In addition to my priestly ministry – which I love! – I’m an avid science fiction & fantasy fan, a relatively newcomer to the anime scene, and very much invested in exploring technology & games (video & tabletop). In addition to this website, you can find me on Twitter (@fathermaurer) and in Reddit – particularly the r/AskAPriest subreddit.